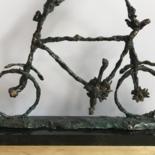 Original work - bronze sculpture - from prestigious hungarian artist – painter and sculptor - Erno Toth.
His sculptures decorate squares, city streets, public buildings and exhibition halls not only in Hungary but also in Sweden, Finland, France, Austria, Great Britain, Italy, Germany, the Netherlands, Switzerland, Russia, Japan, USA, Canada and in Taiwan.
In Hungary, his works are represented in collections of all major galleries, such as the Hungarian National Gallery, the Mihály Munkács Museum in Békéscsaba, the Janos Tornyai Museum in Hódmezővásárhely, the Ottó Herman Museum in Miskolc, the Janus Pannonius Museum in Pécs and others.

In the world of Erno Toth, dream and fantasy never become separated from reality, the possible from the impossible, the good from the bad, the tragic from the funny, the face from the mask, or the beautiful from the ugly. In his pictures many figures swarm in colourful crowds, usually in a cheerfully optimistic mood, but he always depicts the reverse as well as the fair side of things.
The world of Ernő Tóth is a very consciously structured world with laws rather unlike those that govern reality. His world was not created in six days, and it has not three but a multitude of dimensions - the three dimensions of space are as tight as a mousehole compared to the dimensions of feeling, thinking, jokes, dreams, and imagination in the artist’s world.
His inspiration comes from many places but is concentrated in opera, theater, carnivals, hunting, food, wine, and, ultimately from the great master Chagall. We have not found any artist that comes close to his style. His work tends to bring a smile to everyone’s lips and brightens a room as soon as it is hung.