My art is characterized by spirituality, sacrality, love, harmony, peace and the presentation of the pure traditions.

Zsolt Malasits was born in Győr in 1961. He lives and works in the same town. His fine arts studies were done in Finland between 1989-1993 on Imatra Art School, at Saimaa University of Applied Sciences in.Imatra.

He has been creating artistic quality work of arts since 1984.His applied technics are: ceramic,-stone,-bronze sculptures,canvas and hand made paper based oil,acrylic paintings.In 1998 he opened his gallery in the historic downtown in Győr which is his workhop and where he has a permanent exhibition.

In 2000 he founds the "Epoch making Group" where he is the art director as well.The goup gathers famous Hungarian painters who paint huge canvases and put them on certain walls of the town.

In 2008 he creates the artistic Group "Three Hands".He has been long ago concerned by the human relations,the relation to God and the humans,things in life,love,affection,the way seeking of man in the created world. These are the main themes of his works. In his pictures the fish symbol appears regurarly which symbolizes the methamorphosis and the intangibility of things. The warm world of colours,the forms symbolize the longing for a pure life.He does not want to offer only a visual experience but to awake the thoughts,too.His inner life is caracterized by a basic duality:the good and the bad,egoism and devotion which are struggling in his creator soul.His main aim is to look for and to find the "Essence".

His hands are guided many times by the divine providence and inspiration which is much stronger and pure than the limited conceptions of the earthly ego.

His art is characterzied by spirituality,sacrality and the presentation of the pure traditions coming from the era of our saint kings.

In 2017 he paints his Saint Laszlo Icon painting using several techniques.One of it is transferred to the Hungarian Embassy in Krakow for a permanent exhibition as Saint Laszlo was also born in Krakow.

Since 1993 he has been an active member in the cultural life of Győr.His name is attached to several exhibitions,cultural programmes and charity outings.


The reputation of Győr is also thanked to his name by artistic festivals organized abroad.Among others in 2017he won two golden qualifications in two different international exhibition.One in Poland at the Hungarian-Polish days and the other in France.

The personal peace of mind of Zsolt Malasits is supported by the importance of the family thus showing a good example.All this is set to the service of humanity and only the next generation will decide how to rate the achieved result.

He won awards in Italy and twice in France. 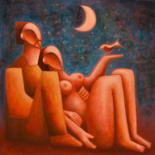 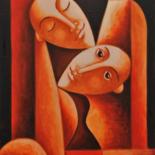 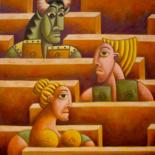 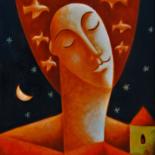 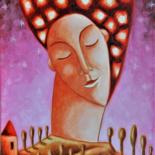 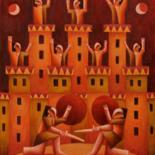