His unique visual language offers viewers new levels of perceiving reality, in which, by overwriting conventional approaches, he builds a dialectic relationship between content and objectuality.

Zsombor Barakonyi is a professional Hungarian artist. His unique visual language offers viewers new levels of perceiving reality, in which, by overwriting conventional approaches, he builds a dialectic relationship between content and objectuality. His works are postmodern panel paintings depicting visions of metropolitan flâneur.

The mechanisms of Barakonyi’s special thought structures are already revealed in the process of creating his works; his paintings attest to a mature, thought-trough artistic logic. After graduating from the Hungarian University of Fine Arts and also earning a Doctor of Liberal Arts degree there, Barakonyi went on to win numerous awards and prizes. It was 10 years ago that he developed his unique style. To his foundations in art history and his professional skill, he ads boldly defined viewpoints that gravitate towards the transcendental, lending his works the capacity to not only reach viewers at the visual level, but also open them to other dimensions of perception. Any attempts at “copying” his signature method is problematic because, although it is traceable, it is not clear how the abstractive levels of reality can be set in motion and how the qualities of essential uniqueness can be brought forth. The depicted scene is always a snapshot, capturing a moment in the urban hubbub and commotion, which reveals itself through a model of perception whose anchoring points have been shifted into a new balance.

Zsombor Barakonyi’s body of work, which has matured into its present form during a prolific 10-year period, has been showcased in major European cities and comprises a part of numerous collections both in Hungary and abroad. His upcoming jubilee exhibition will be held in Yekaterinburg, Saint Petersburg and Moscow. 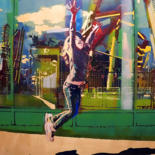 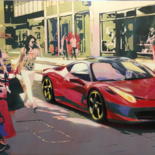 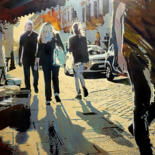 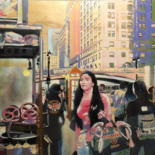